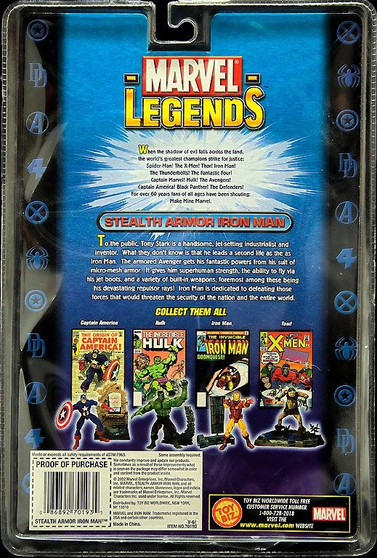 To the public, Tony Stark is a handsome, jet-setting industrialist and inventor. What they don't know is that he leads a second life as Iron Man. The armored Avenger gets his fantastic powers from his suit of micro-mesh armor. It gives him superhuman strength, the ability to fly via his jet boots, and a variety of built-in weapons, foremost among these being his devastating repulsor rays! Iron man is dedicated to defeating those forces that would threaten the security of the nation and the entire world.

When his family was killed in the crossfire of a Mafia shootout, Frank Castle put his military train…

Assassin. Lover. Enigma. Driven by tragedy and honed by training, the femme fatale known as Elektra …

Fed up with the Authority's meddling in world affairs, the government brings on a killer-for-hire na…

The most popular collectible in history is now available in the Speed Helmet design. The Speed Mini …

ABSOLUTE CARNAGE TIE-IN! Everyone who has ever worn the Carnage Symbiote has a Codex, including Norm…

Based on the bestselling series Batman: Hush by Jeph Loeb and Jim Lee, Medicom unveils another relea…

This exclusive action figure of Eddie George, Houston Oilers RB, No. 27, was only available at the 2…

Warm up just like the Suns in this authentic shooting shirt by Adidas! Featuring a multi-layered tac…