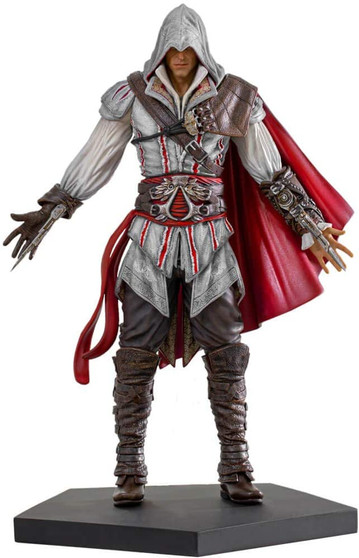 Ezio Auditore da Firenze is one of the noble protagonists of the \”Assassin\’s Creed\” game series, the second in the series. Born in the city of Firenze during the \”Renaissance\” period in Italy, without the knowledge of most historians and philosophers, he was an influential member of the Order of Assassins. Unaware of his murderous heritage until he was 17, when he witnessed the hanging of his father and brothers, he was trained by his uncle. Ezio seeks revenge against the Grand Master of the Templars, Rodrigo Borgia, the 214th pope of the Catholic Church, who ordered the execution of his father and brothers.

Features:
– Limited edition
– Based on original video-game references
– Made in polystone
– Hand-painted

The Angel Statue Yellow Variant stands approximately 12.5 inches high atop the display base. This in…

This fantastic Viking 1/4th scale statue is a very limited production of 100 pieces only, completely…

An Elven prince from the forest kingdom of Mirkwood, Legolas Greenleaf joined the Fellowship of the …

Bring home Barry Sanders, the legendary running back for the Detroit Lions, for your NFL collection …

If you like the hit television show The Big Bang Theory, then you probably like comic books, which i…

A leader in the iconic faces for the Mortal Kombat franchise, “Scorpion” is the alias of…