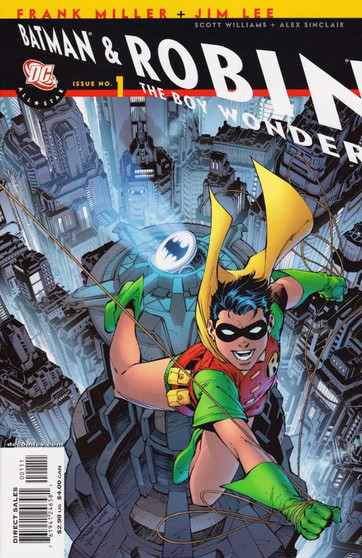 The all-new saga of Batman and Robin begins here! The people responsible for some of comicdom's greatest tales, Frank Miller (BATMAN: THE DARK KNIGHT RETURNS, Sin City) and Jim Lee (BATMAN: HUSH) team up for the first time to bring you Batman and Robin like you've never seen them before in this imaginative reinvention of these classic characters that will have your eyes popping and your head spinning! All hell breaks loose at the circus as millionaire Bruce Wayne and gal pal Vicki Vale witness a young boy's life shattered before their eyes. Orphaned, Dick Grayson has nowhere to go and no one to turn to? no one but Bruce Wayne and the shadow of the bat! Expect action, adventure, guest-stars and the unexpected as Miller and Lee deliver the ultimate tales of the Dynamic Duo! This issue was released with two covers by Lee & Williams, featuring Batman (50%) and Robin (50%).

Comic conditions range from VF to NM or better. If a comic drops below that range we will mention it in the description. Additional info about our comics in Terms and Conditions. Bagged and Boarded! Ready to ship!

The pulse-pounding adventure continues with the All Star creative team of Frank Miller, Jim Lee &…

'THE LEGEND OF STEVE' CONTINUES! Steve Rogers' mission to clear his reputation and to re-establish t…

The most popular collectible in history is now available in the Speed Helmet design. The Speed Mini …

Special Edition. Don't miss an incomparable new version of the best-selling premiere issue of ALL ST…

To show the world that super-heroes police their own, Superman has assembled a 'Justice League of Am…

The pulse-pounding adventure continues with the All Star creative team of Frank Miller, Jim Lee &…